For October’s first newsletter I’ve got some news about the epic fantasy novel I’m revamping, a couple of holiday snaps, as well as a special offer on my favorite collection of short stories, which I’m confident you won’t want to miss!

First up, the epic fantasy:

For the past month I have been hard at work revamping the novel once titled Saint Ignifer’s Rise, the very first book I wrote, and the first I ever published!

I always loved it, but after promoting it a few times after launch (way back in 2014) I lost confidence in it as a product, and never pushed it again. At that point I’d already spent 4 years writing and rewriting, and not only couldn’t stomach altering it any further, I also had no idea what to do to make it better.

Approaching it now in 2017, I figured I could make those improvements. I’ve written over 10 books since then, been through maybe 20 cover design processes, and know more about marketing overall. So…

The old title was first Saint Ignifer’s Rise, which I trimmed to Ignifer’s Rise, but both of those are a mouthful, right? I love the call out to fantasy fans with a made-up name in the title (actually ‘Ignifer’ is Latin and means volcano), but it really gives no clue about what’s to come 🙁 .

So, I have switched to- The Saint’s Rise.

This is simple and clean. I believe it says fantasy, and the cover and blurb should make that super clear. 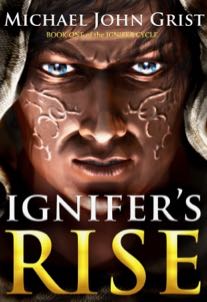 So what about the cover? Well, I’m still working on that with my artist.

Maybe it wasn’t clear what kind of story it would be, or the illustrated style was a turn-off, or the scars, or a combo? Nobody knows. It never sold, and I didn’t push it again.

The new cover is shaping up to be way clearer. I’ll share that in a pre-release newsletter later in October. It’s pretty gorgeous so far.

As for the rewriting, I thought I’d be mostly cutting, but instead I’ve been adding! To make the story work, the world had to be more fleshed out, character arcs straightened, story mechanisms consolidated.

I’m now looking at 2 weeks of final edits and proofread, before launch at the end of October. And I’m already really proud of this book, and confident it offers a great experience. It’s going to be long, twice as long as my zombie books (160,000 words), but it packs in the action and reversals.

Last time I promised a few pictures of my holiday in Penzance, Cornwall (southwest England), in particular the stunning views over Land’s End, the southern or western-most part of England. Here are a few: 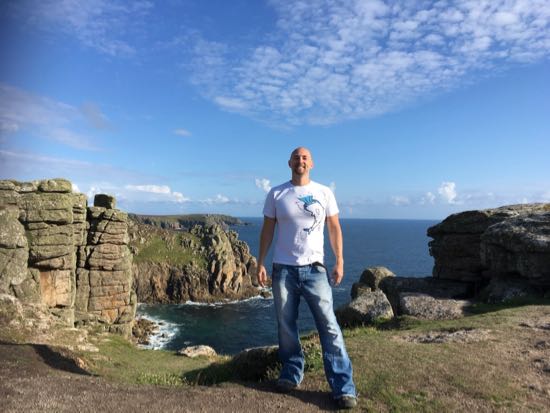 Yours truly in front of a stunning Land’s End view. 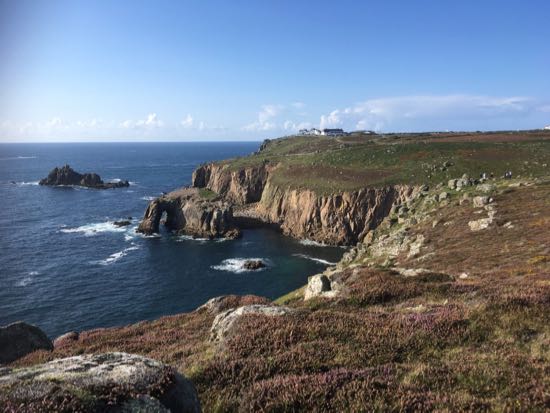 A view back without me in the way. 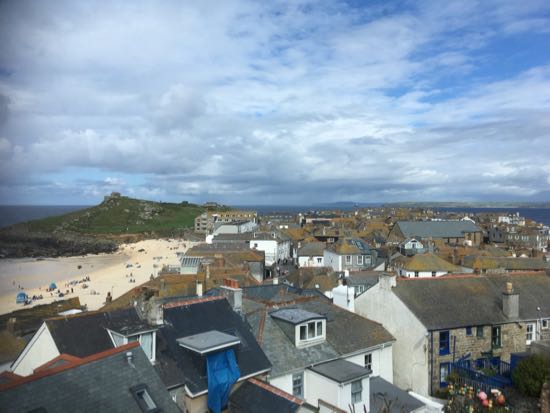 The view over the rooftops in the little town of St. Ives.

It was a really wonderful holiday, and I can’t wait to get back to Cornwall some time soon.

In a previous newsletter I mentioned getting new covers and blurbs for my two short story collections. Like the epic fantasy, these ones went out early and I didn’t revisit them, thinking collections were not what people wanted.

That said, again, maybe it was the cover, or the titles, or the blurbs, so I retitled, repackaged, and re-blurbed them both!

The collection I have on offer for you this week, from $5.99 down to 99c (sorry, the offer is only available in the US Amazon store at the moment, if you’d like it anywhere else just email me back and I’ll sort it out!) until Oct 6, is Death of East.

I retitled it Death of East after another story in the collection. Here’s the new cover: 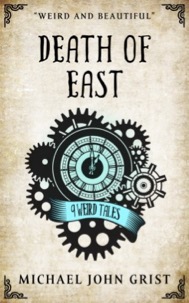 It’s got three short stories that were previously published in professional fiction magazines (Beneath Ceaseless Skies and Ideomancer).

If you like short stories, and fantasy, and the surreal, I’m certain you’ll enjoy it. Here’s the blurb for the title story:

The direction East is dead.

When the direction East, a giant living atop an island at the far Eastern ‘pole’, is murdered, the Empire falls into disarray. The compass can no longer be trusted, and trade with the colonies falls apart as merchant fleets founder on rocks and get lost on the open ocean.

Only the Lady Arabella, a legendary explorer and captain of the fastest ship in the fleet, can help. She knew the giant East before his death, and only she suspects the true identity of his killer.

But she must act with haste, as the men of the Empire seek to turn its great bureaucracy against her, even as a new and terrifying challenge rears its unlikely head – love, while she seeks to solve the question of the age.

Who murdered the giant East?

Get Death of East for 99c here.

Here’s the beginning of the title story:

The giant rock hurtled through the sky a thousand fathoms high. Seawater and sludge boiled off at its hot red edge, burning a smoking trail above the clouds high over the Armorican continent. At the Pacifac Ocean’s edge its great arc began to slow, and it dipped towards the ruffled grey waves, drawing within sight of a vast grey figure seated upon a vast grey throne, alone at the heart of the ocean.

It hit the water only miles from the throne’s pedestal, burst froth and brine a hundred fathoms wide, then sank.

Hundreds more followed, each on different arcs. Some soared far above the orange-sand barrens of Abindia, others over the sweltering deltas of the Mesopotame, some even above the ice-packed tundra of Ancharcita. Every day for a hundred days the rocks circled the world, until at last one struck its target.

“There’s something wrong with the East,” announced the Empire’s Minister for Trade, his bald pate slick with sweat in the cardamom gas-lights of Lady Arabella’s sitting room. “Our compasses no longer function, our maps are all useless, and we are at a loss as to why. The Empire is desperate, Lady, and I beg for your help.”

The Lady Arabella eyed the slender gentleman before her. He was dressed in brown tweed with tartan-patched elbows, perched like an anxious figurehead on the edge of his chair. For such a high-ranking Cabinet member he cut a rather guileless figure.

“Steady yourself, sir,” she warned, turning the brass musket-tamping rod she used as a cane idly in her hands. “The Empire is never desperate.”

“I’m afraid in this matter it is,” the Minister said, and drew a sheaf of papers out of his valise with pink and spindlish fingers, spread them across the low table.

Lady Arabella leaned in, studied the lists and charts before her. “Nautical reports?”

The Minister nodded. “We have lost hundreds of ships in the last three months alone. Some were bound east for Armorica or the Panamian passage, others lost in transit from the west, and distant Abindia. Of those few that landed safely, all claimed that the direction east, along with the lines of longitude you discovered, are no longer apposite to the task.”

Arabella stopped swiveling the musket-rod, focused her steely eyes on the Minister. “East is immutable, sir, as are the lines of longitude. The problem must lie in the navigation. Have the compasses of these ships been tested?”

The Minister ran a white pocket square across his queasy brow. “I mean not to offend, Lady, but have you viewed a compass of late?”

“Of course not,” Arabella snapped. She remembered well the indignity of Parliament men storming her apartments on the day she was cast from government. “Not since mine were stolen. Now I must license a geomancer when I set out to hunt.”

“Then I hope you will forgive this,” said the Minister, and drew from his valise a brass-cased oil-compass. “Do you recognize it?”

Arabella regarded it coolly. “Of course, It is my own.”

He proffered it, and she took it.

“Would you state it an accurate instrument?” the Minister asked, rubbing again at his hot pate.

Arabella turned the compass in her white-gloved hands. Many years had passed since they’d seized it from her, for refusing to disclose how she’d fixed the lines of longitude. The brass was well polished, the oil within yet liquid, the compass rose and azimuths segregated and clear. She looked up. “It seems well. At the least you have taken fair care of it.”

“Then it will confirm that East is this way?” said the Minister, pointing to a wall resplendent with bizarre animal heads, the trophies of her hunts.

“Of course, man. Any compass denotes the cardinals.”

“Then may I suggest a test? Pray stand and cup your eyes about the instrument, then proceed directly East from there.”

Arabella frowned. She had not parleyed the natives of Abindia into trade-bondage to play the fool now. “I shall do no such thing.”

“Apologies, Lady, but I do not think you will believe it any other way. Humor me please, and I shall cover my eyes with this scarf.” He pulled from his valise a black silk stole.

“I come in supplication, at the request of the Prime Minister himself.”

“An idiot of a man,” muttered Arabella, as he wound the stole around his eyes. When it was done, she spoke again. “Will you now have me pin on your tail? I do not think your head shall mount very well to my wall.”

He chuckled uncomfortably. “Only the bearing, Lady, I beg it.”

“Very well.” She stood, brushed her flowing leathern dresses to the side, and cupped her eyes about the compass. In careful strides, lest she come unseen upon the trestle table, she headed east.

Yet she did not stub her shin on the table, nor did she arrive at the antler-prongs of a taxidermied ibex, as she expected. Rather she came to rest by the portrait of old Galilee, whereupon she lifted her head and surveyed the room behind her.

“Have you yet done?” asked the Minister.

She studied the compass again, but there could be no doubt. She had followed east, and arrived north. She looked to the Minister, who was removing his blindfold. “Do all the Empire’s compass malfunction so?”

“Lady they do, and hundreds of ships lost.”

Arabella set the compass down and moved to one of the map-chests lining the sitting-room walls. From within she withdrew a vellum cartograph, which she unfurled across the low table. It depicted a topographical array of the world, with countries marked on longitudinal lines like entries in a ledger. She snatched up a scrap of paper and wrote out terse calculations, ignoring the Minister at her side, until at last she sat back in stunned silence.

She ignored him, went instead to the sitting room’s door, where a valet stood in attendance. She handed him the scrap of paper and gave a terse command, “By telegraph, at once.” He bowed, strode away.

The Minister watched this transpire befuddled. “Might I be let in on this secret, Lady? Will you explain yourself?”

Arabella cut him a steely smile, then slapped her musket-cane down upon the cartograph, at a point in the midst of the Arrantic Ocean. “I will explain it, sir, to a gathering of Ministers in Parliament itself. For the giant East is dead, and the others yet are sure to follow.”

Well well, what do you think?

I hope that is enticing. If so, please head along to Amazon US and pick up your copy (or email me for other areas.)

Very best for now, and look out for the cover reveal of The Saint’s Rise coming soon!